Pages from the Past

Its been a long time since we took some time to update our blog so before a year was up we decided to put a few words and photos together and catch up on our birding days. Despite the days being warm now I thought I would dive right back into winter for a while and then work our way along to the present, one blog entry at a time. Over the past 5 months we have seen quite a few birds so hopefully you’ll bear with us and enjoy some cooler photos from our early year antics.

Once again the Snowy owls took up much of our camera memory card as many again graced us with their presence this past winter. These birds stayed around for quite some time this year as the last one we saw was on June 6th. I guess it finally got too warm and harder to find food as the crops started to take away their bare fields. 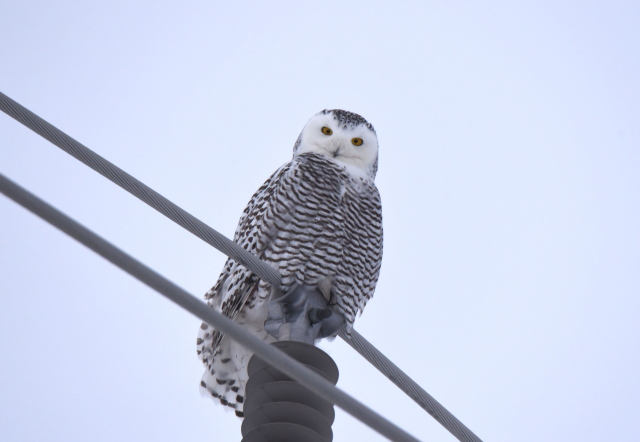 Even though these beautiful owls were fairly common again this year we didn’t see the fallout that we had noted in January of 2017 when we saw 86 Snowy owls in one day. This year you could probably see about 15 to 20 on a days drive through the countryside. Several of the owls would be off a distance in a field or on a fence post but sometimes one would be close for great photos and give us and others a chance to really appreciate the size of these beautiful owls. The mostly white males seem to move through the area quickly so many of the ones we see during the winter are females and juveniles. In the Spring on the return migration we often see more of the white males as they slowly make their way north.They are always interesting to see during the time when many of our birds have departed to the south for the cold winter months. We often go for a drive on a pleasant day just to see what birds do brave the winter months to give us some nice views.

One large bird that has come back from being seldom seen to a common winter sight is the Bald eagle. These huge raptors gather in the winter months and its not uncommon to see 40 to 60 of them perched or soaring near Baie du Dore where the outflow from the nuclear power plant keeps the lake water open. With this open water come many fish and many ducks so the Bald eagles find food easy to come by and often line the ice banks waiting for a slow duck or an unaware fish to use as their next meal. There is a mixture of adult and juvenile birds in this area until late winter when the adults head off inland to find a tree and a food source to start their nesting ritual. This one in the photo below is an adult with a white head and tail. Juveniles take five years to get their white head and tail feathers and can be quite varied in brown and white colouring up to that time. 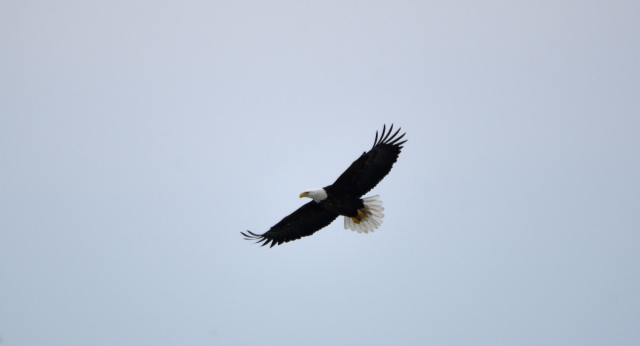 On windier days when the cold west wind is coming off the lake the eagles often gather on the leeward side of a forest close to the shore but still protected from the wind. In this photo most of the birds are adults but several juveniles can also be seen mixed in with the adults some days. On a good day we’ve seen about 40 Bald eagles perched in this location. They also have other favourite trees to perch in but this area attracts the most. 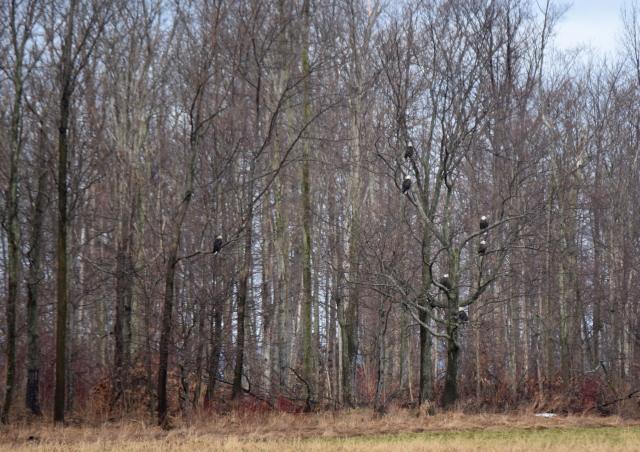 Many of the smaller birds head south to escape the cold winter as I mentioned previously but some stay around and brave the cold weather. This American Tree sparrow is one sparrow you can see in winter as they migrate down from the cold far north of Canada. 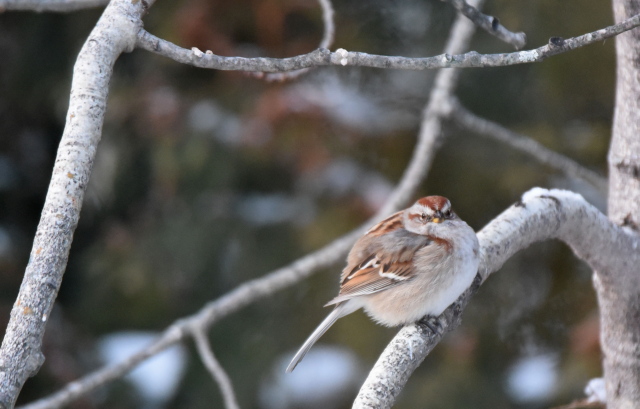 From the photo you can see one of the methods that the birds have to be able to survive the cold. They fluff out their feathers creating air spaces between the feathers that help to insulate them from the cold. Many birds at this time of the year look much rounder than they do on the warm days of summer, due to these fluffed out feathers. Along with the American Tree sparrows, many Black-capped chickadees, American goldfinches and several species of finch and woodpecker come for regular visits at the bird feeders that provide some seeds in the winter. Its always pleasant to see the activity of the birds in the yard as they try to ensure they have enough energy from their seeds to keep from freezing from the cold temperatures they have to endure some nights.

Other birds that don’t seem to mind the snow are several species of gulls. In the following photo you can see a juvenile Glaucous gull on the left, a juvenile Iceland gull second from left and two juvenile Herring gulls on the right as they stay down in the snow out of the cold wind.  They often can be seen cruising along the shoreline on a windy day looking for fish that get washed up and stranded on the ice. Most of the Ring-billed gulls head farther south as winter approaches but they are replaced with gulls from the far north that show up here to give us a variety for our photos. There are several Great Black-backed gulls (largest gull in the world) that winter over near Baie du Dore along with the Iceland, and sometimes Little gulls (one of the smaller gulls). The open water that the eagles like is also a large draw for the gulls as they search for fish and other washed up tidbits. 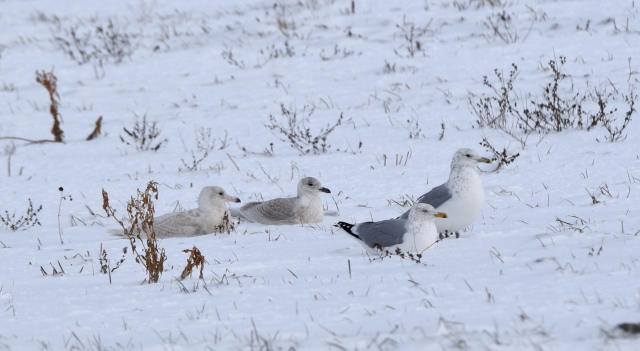 The birds are our main subjects but on occasion other interesting inhabitants of the area catch our attention at times. On one of our ventures out to see what birds were at the mouth of the Sauble River we found a pair of North American River otters. They were having a productive day as you can see from the fish that one is eating. They swam around diving for fish but always keeping an eye on us until they eventually disappeared behind a bush, leaving us to enjoy the chance meeting. 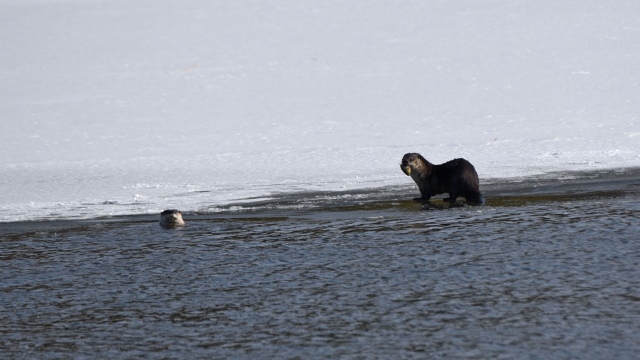 Closer to home we also see a pair of local inhabitants at various times of the day. These Coyotes pass through the yard often while patrolling their territory. Usually they go through the yard when its too dark for photos but one day they were out on the ice pack looking for whatever might have gotten frozen in the ice. One of them was lying down on the ice for a few minutes while its mate explored the area looking for food. It was snowing a bit but we did at least get a chance to get a photo and record these winter visitors. We often hear them in the winter as well and surprisingly enough two coyotes can sound like a group of 10 as they howl and chat back and forth to each other on a calm winters night. Once winter is over they usually disappear as they head off to raise a family somewhere in their territory. 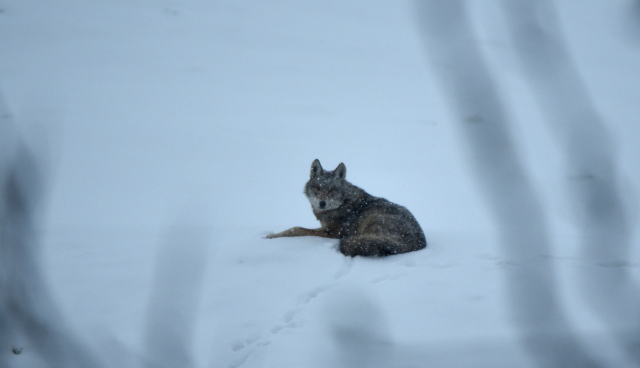 Due to the fact that these coyotes visit the yard each day…or night in the winter, the other yard inhabitants have to be constantly on the lookout for danger. As you can see from the next photo one of our yard Cottontail rabbits was certainly using its ears and eyes as it checked the ground under the feeders for stray seeds. Usually we think of rabbits as eating carrots and other greens but these rabbits don’t even seem to know what a carrot is. We put one out one day for it and it bypassed the carrot to continue to search for seeds on the ground. I guess whatever is familiar to the wildlife is what they tend to eat. 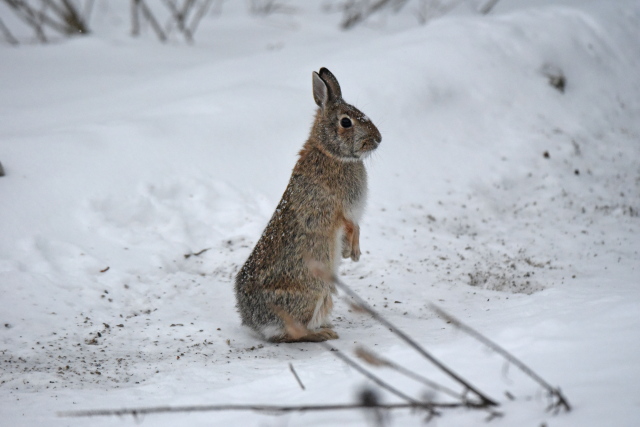 The Black-capped chickadees in our yard are not very tame as they eat from the feeder and not from our hands but at MacGregor Provincial Park this is not the case. Many people visit the park in the winter and love to feed the chickadees from their hands so these little birds cooperate quite nicely. Our grandchildren always like to visit the park in the winter and have those small birds perch on their fingers or hand while deciding on which is the best seed or peanut to take. As you can see from the photo even the adults love to get into the action as the birds cheerfully flit from hand to head to wherever the seed happens to be. 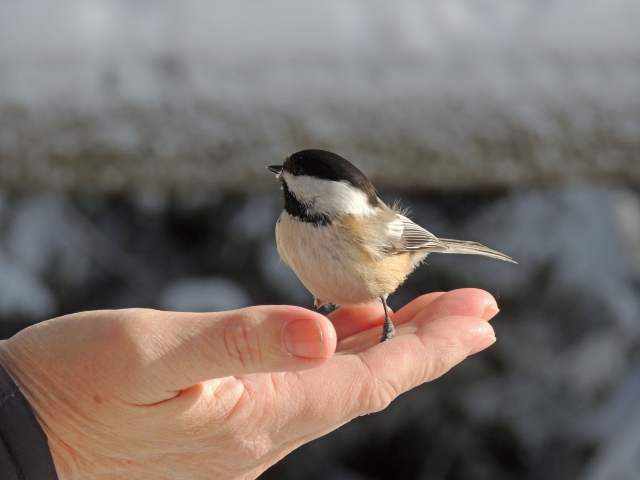 Now as the winter heads towards spring the Bald eagles are checking out their nest and refurbishing it as required. This particular nesting spot has had some bad luck with branches on the trees the eagles picked, breaking and letting the nest fall to the ground. This is the fourth nesting attempt and it appears to be going okay so far but Bruce County winds in the winter can soon change that. Hopefully all goes well and I’ll have some spring photos of the adults feeding some young at this site. 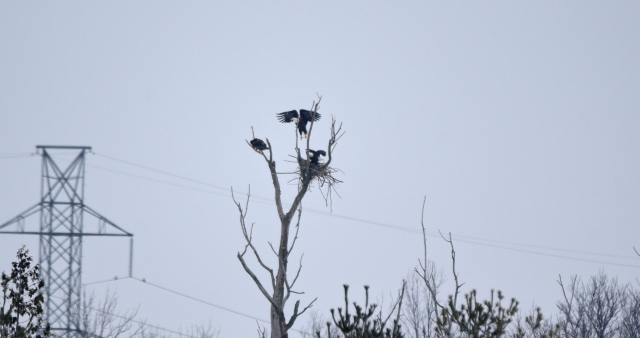 As the winter rolls along the Snowy owls just keep appearing at various locations and even though most aren’t very close to the road we still like to try for a photo in the owls natural habitat…..at least as natural as Bruce County can be . 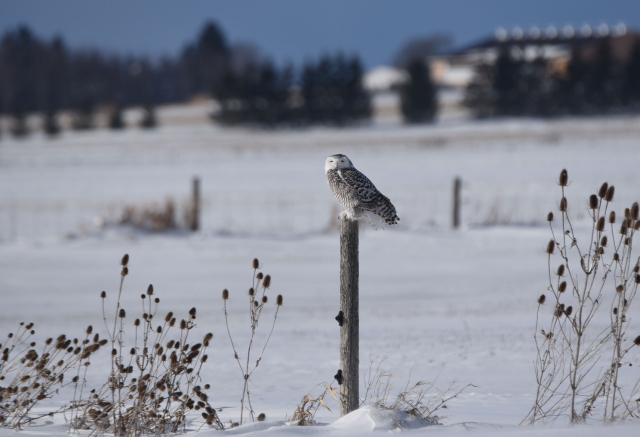 Now that we’ve covered a bit of the basic Bruce County winter photos and events we’ll move onto our short trip to South Carolina next. It’s always nice to go for some sunshine and warmer temperatures during the long winter at home. The trip south this year didn’t actually give us amazingly warm temperatures but it was a nice change and gave us nice views of birds that we don’t see at home or at least won’t see at home for many weeks yet. With that in mind we’ll say goodbye for now and as we wing away we’ll be back in a few days with more of our winter activities. 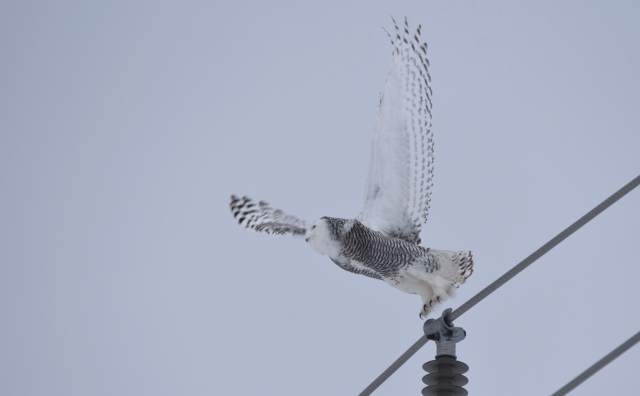 View all posts by bobandannemarie

6 thoughts on “Winter Around Home”